Porsche is three for three in IMSA’s WeatherTech series GTLM class victories after a win at the 12 Hours of Sebring, the sprint race on the streets of Long Beach, and this weekend at the Mid-Ohio Sports Car Course. In what threatened to be a rainy weekend but dried up before the race on Sunday, the two factory effort Porsche 911 RSRs ran a stellar race in spite of a bit of adversity to finish 1-3 with the #912 car of Earl Bamber and Laurens Vanthoor winning over the sister #911 of Nick Tandy and Patrick Pilet. Porsche was able to thrive during this race as much of it continued under green flag conditions with very few full course yellow conditions. The start went well for the eventual winners, as Laurens Vanthoor started from second on the grid and maintained position through the first 50 minutes of the race before handing off to Bamber still in second. With a perfect fuel strategy and an absolutely inch perfect run, Bamber was able to bring the car home victorious. 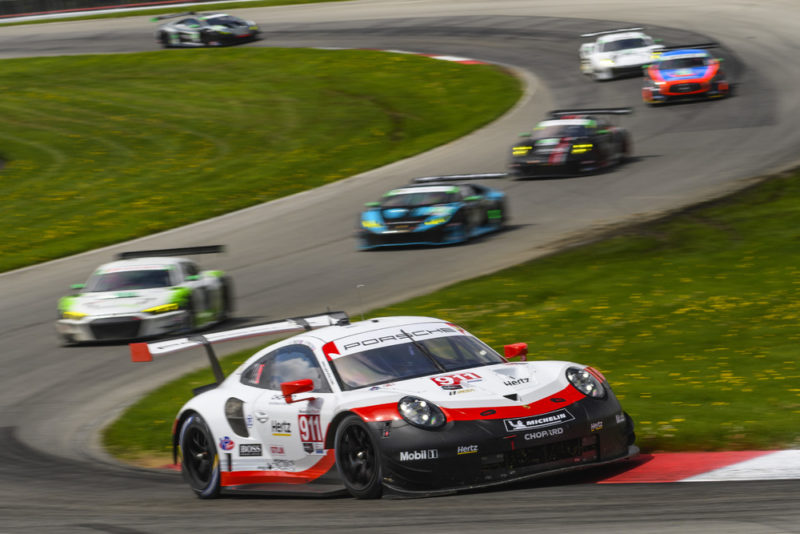 Unlike the other car, Patrick Pilet’s race did not start out smashing. He came out of the gates swinging, but was given a drive-through penalty for jumping the start. While he was relegated far behind the lead of the GTLM class, he mounted a serious charge to come back through the field. After passing off to Nick Tandy, the battle simply continued to rage. If you want to see just how intense Tandy’s drive was, check out this quick video of him making an, ahem, aggressive pass on one of the BMW competitors.

When a late race yellow flag came with just 30 minutes left in the race, it was a sprint to the finish with a BMW getting past into third on the restart. Tandy made his way back by the Bimmer before the checkered flag fell. It was an intense run, and marks the first time this season that both Porsche competitors finished on the podium. Coming through the field on a full green flag run from last to third is mighty impressive.

From here both 911 RSRs will be shipped over to France for the 24 Hours of Le Mans and then will be shipped back to the U.S. for the next IMSA round at the 6 hours of Watkins Glen on June 30th.

Comments on the race
Steffen Höllwarth (Programme Manager IMSA SportsCar Championship): “That was a perfect race with a sensational result. We had the fastest car over the distance. Our engineers did a great job with the setup. With Earl and Laurens everything is working perfectly at the moment. But the pursuit race of the sister car was just as strong. Victory, podium place, leading all classifications plus the fact that our colleagues in the FIA WEC have just clinched the world championship yesterday – it doesn’t get better than this. Now we’re looking forward to the next great challenge: the 24 Hours of Le Mans.” Earl Bamber (Porsche 911 RSR #912): “The day was perfect for us. It’s incredible that our run in Mid-Ohio continued seamlessly. We’re leading the championship, but that doesn’t mean we’re leaning back. The competition will certainly not make it easy for us. Before the next IMSA race we first have to tackle Le Mans in mid-June. Hopefully everything will continue to go just as brilliantly there for us, too.

Nick Tandy (Porsche 911 RSR #911): “That was an extraordinarily eventful race today. During my chase through the field I enjoyed some wonderful duels with the Ford and BMW drivers. It was huge fun. But right now I’m looking forward to our start at the Le Mans 24-hour race.” In the manufacturers’ classification, the Porsche GT Team now ranks first after four rounds with 135 points and a 15-point advantage. The factory pilots Earl Bamber and Laurens Vanthoor sit at the top of the points in the drivers’ classification, with their team colleagues, Patrick Pilet and Nick Tandy, on third.