There is an old adage that goes something like this: “If your axe has had its handle replaced twice, and the head replaced once, is it still the same axe?” This particular 911 seems to be a case study in that adage, as it has been rebuilt a number of times, and each time it has emerged a slightly different animal. Beginning as a bog standard CIS injected 2.7 liter 911T, the car lived a long life in standard condition. A recent repaint saw the car gain Carrera 2.7 RS appendages, which is how the buyer found the car.

The current owner, Mr. Maurice Van Den Tillaard, otherwise known as “The Dutchman” and proprietor of Dutchman Photography, is a friend of the Porsche celebrity Magnus Walker. Many of the recognizable photos of Magnus’ Porsche collection have been taken by Dutchman, and there are quite a number of them. Back in February of 2012, Maurice found the 911T in question for sale via the internet in Southern California, and had local boy Walker arrange the purchase and stored it until Van Den Tillaard could come to collect it. Two weeks thereafter, Maurice flew over from the Netherlands to collect the car, and took the car on a 15 day SoCal expedition. 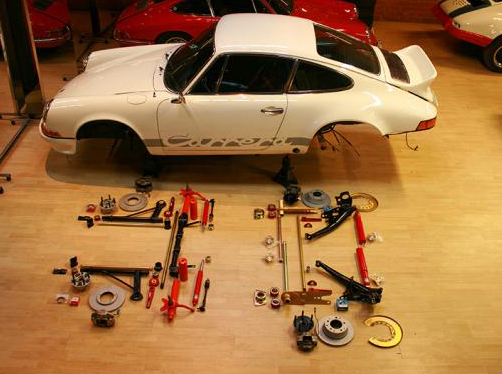 After the trip Maurice returned to the Netherlands, leaving the 911 behind, and gave Magnus and his cohorts a laundry list of things the car needed. Walker gave the Porsche some of his unique hot-rod touches, including the louvered decklid he’s known for. The suspension was overhauled with a number of quality aftermarket performance “hop up” parts from Elephant Racing and Tarrett Engineering, as well as some Koni Yellows at all four corners. To handle braking, 911S calipers were installed on the front, while the standard ‘T’ brakes are used at the rear. From that point, the car was shipped back to the Dutchman’s namesake homeland for his personal every-day enjoyment. In early 2013, it was decided that the car’s anemic 130 horsepower was not enough, and a 1986 911 Carrera’s 3.2 liter flat six was installed professionally by Speedservice for a hefty increase to an extremely useable 231 horsepower. The car also received a pair of yellow bumpers to give it a uniquely hot-rod look. With the horsepower now addressed, the car was treated to regular exercise. Unfortunately, a small shunt damaged the front bumper and one of the fenders, meaning that some bodywork was needed. The decision was then made to re-spray the car in its original ivory color. As can be imagined, yellow bumpers do not match well with the subdued tones of the original ivory, and they were changed to a more period appropriate gold, which I think looks absolutely fantastic. The Carrera rocker stripes were replaced with IROC style stripes, only adding to the early-seventies hot-rod Porsche vibe. The car is currently listed on The Samba at 87,911 Euros, which is about $122,082. I’m skeptical that this re-handled, re-headed axe is worth the asking price (However the last Magnus Walker 911 to come on the market did sell for over $300k at auction). As skeptical as I am, we have seen tastefully modified long-hood cars reach larger numbers in the recent past, and I’d call the modifications to this car nothing but tasteful. If this looks like your cup of tea, you can read the seller’s description below, and see the ad here.

This car was acquired by Magnus Walker in February 2012, on the outskirts of Los Angeles in the city of Sherman Oaks, after I found it on the Pelican Porsche forum. Two weeks after Magnus picked it up I flew to Los Angeles and drove this car around Southern California for 15 days. After that Magnus and his team started work on the car.

It was originally delivered in the state of Oregon, in the city of Portland. Apparently it has always been stored inside because the body had very minimal rust. The tank support and front suspension pan have been professionally replaced and the rest of the floors are all original. Magnus and his team rebuilt the complete suspension and brakes, and worked on the cosmetics and interior of the car. The Fuchs rims were powdercoated black and of course the right stance was set. The 915 transmission was also rebuilt and a Wavetrac limited slip differential was installed. The car was shipped to me in The Netherlands in late July of 2012. I had it checked by the Dutch DMV in September and was able to do some test drives before the winter came around.

In 2013 the car went to Speedservice in The Netherlands where the 2.7 CIS engine was swapped for a 3.2 version from a 1986 911, which had ran approximately 140.000 kilometers. The engine is free of leaks and runs very strong. Around the same time I added the yellow colored bumpers to address the hot rod look a little more. After a minor accident where the car slid off the side of the road, I damaged one of my fenders and the front bumper. Together with Olav at Speedservice I decided to add new bumpers from DP Motorsport, and a new fender that was needed. While at it, I chose for the option to give the car a complete “windows out” respray in its original Ivory White color. The yellow of the bumpers did not match very well with Ivory White, so we chose to paint the bumpers gold, to give it a fresh seventies vibe. The classic race touch was further enhanced with the addition of IROC style side decals.

I am a regular contributor to the English Total 911 magazine, and the Dutch RS magazine. The car can be seen in both magazines, in the Living the Legend section, and the Our Porsches section respectively. An in depth feature of the evolution of the car should appear in the French Speedster magazine soon.

What you see here is pretty much the only car which Magnus ever picked up and modified, completely to the wishes of the buyer. A very nice chance to own a Magnus Walker hot rod 911. I have build up an extensive history over the last 2 years and a lot has been done to the car to make this a reliable, good looking hot rod 911.

If you have any questions, please send me a message. I’m more than happy to supply any needed information. Car is located in The Netherlands. Better photos coming as soon as possible. This ad contains some older pictures of the car, and a few new pics of how it currently looks, with the ivory White paint and gold bumpers with RS stripes.

Other Porsche Blog Posts You Will Enjoy
How Singer Turns A Porsche 911 Into Art
The DP Motorsport Project 911 Sleeper 3.2
Mecum Bringing An Ex-Paul Newman 911S To Houston Sale
One Of One Glockler 914-6 GT For Sale