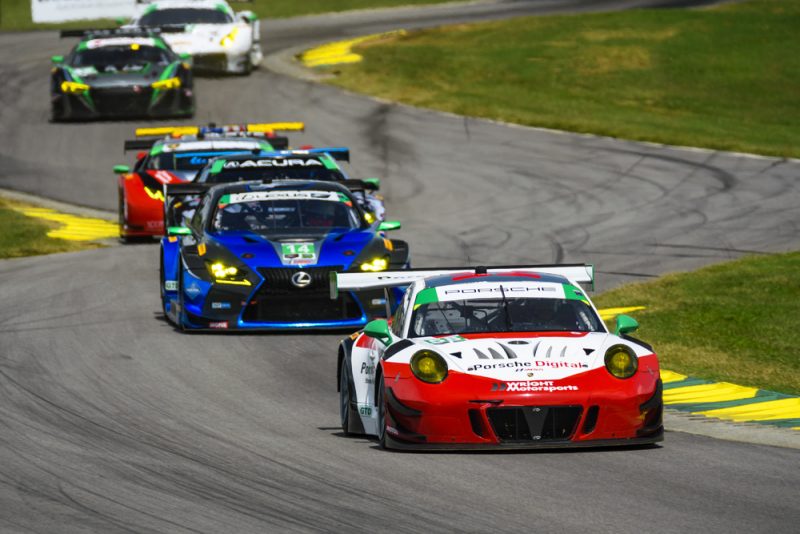 Porsche attacked Virginia International Raceway with the team's typical verve, but similar to their efforts at Silverstone in the WEC race, the IMSA teams had an up and down weekend with some good results and some quite poor. In the GT Daytona category, the Wright Motorsports team from central Ohio scored a well-deserved podium position. The factory team again fielded two cars in the GTLM class, one of which finished fifth in class, while the other fell out of the race from the lead with what Porsche is calling a "technical defect".

The GTD action came hot and fast for the Wright Motorsports team of Christina Nielsen and Patrick Long, and ended with the team scoring their second podium of the season, coming home in second after a frenetic last lap. You can see that drama unfold in the short video below.

In the GTLM class, all looked good for the first hour or so, as Porsche fought their way to the front. The #911 car took the start from second on the grid with Patrick Pilet in the car. Near the end of the race's first hour, Pilet moved into the lead as the formerly leading Ford GT pulled into the paddock behind the wall with a clutch issue. Within minutes, however, Pilet's car was also failing. He pulled off the track from the lead and watched as his engine burst into flames. Thankfully no one was hurt. The sister car of Bamber and Vanthoor had an incident on the first lap and were awarded a drive through penalty as a result, dropping them immediately to the back. They spent the next two hours and forty minutes trying to recover from that lap one mistake, and could do no better than fifth. “That was a day with more lows than highs. Our number 912 car made contact with another vehicle in the first lap, which resulted in damage to a rim and we had to pull out prematurely. On top of that, there was a drive-through penalty. In the end we finished fifth. We implemented an aggressive strategy to put the 911 amongst the frontrunners. After about an hour there was a technical defect in drive train. But it wasn’t all negative: Our strategies were great, and the team put in perfect pit stops. We’ll be back in full force at Laguna Seca.”

“I gained a position right at the start, but then someone hit the rear of my car. We were handed a drive-through penalty and that threw us to the back of the field. Laurens then had to deal with the after-effects of the collision and couldn’t do better than fifth place.” Patrick Pilet (Porsche 911 RSR #911): “The engineers put a well set-up car on the track for us today. Everything came together perfectly. I drove economically to conserve fuel so that we could stay out longer. Our strategy worked perfectly, as well, because we were running at the front when we had to retire unfortunately.”

Patrick Long (Porsche 911 GT3 R #58): “At my last pit stop I was lying eighth. I asked my team who else needed to come into the pits before us. They said: nobody. I pulled my seatbelt even tighter than usual and went for it. I’m delighted with second place. We’ve had a somewhat bumpy start to the season, but now we’re on a roll.”