Porsche has a habit of cranking things up a notch with every new generation of GT3 RS, and this newest 992-iteration is no different. Where the GT3 RS lineup originally began with the 996 as a way to homologate components for Porsche’s racing efforts, the new 992 version is in some ways more advanced than anything Porsche has ever put on the race track. The street car takes inspiration from its racing siblings, but adds in several speed components that simply aren’t legal for any racing series. Let’s take a look at it. The biggest change at the front is the motorsport-inspired aero and single central radiator concept. Instead of the traditional three-radiator design that Porsche has used since the 996, the new 992 will feature a front-trunk-mounted radiator that funnels air up through massive vents in the lid. Interestingly, because that air is hot and would otherwise funnel directly up and over the car into the engine intakes, Porsche had to make some big aero changes, including turning vanes on the roof, and big air directors on the hood, to shove that hot air out over the sides of the car to keep intake air temps as low as possible. The single radiator means there is more room at the front for a proper front wing and active front diffuser, meaning more downforce and better chassis balance.

The active aero is continued at the back of the car with a massive swan-neck rear wing that for the first time features an actively adjustable rear wing element, similar to the Formula One drag reduction system where a flap flattens out on the straights to increase top speed! These active aero adjustments mean the 992 GT3 RS makes more than twice as much downforce at speed as the 991.2 GT3 RS it replaces, and over three times as much as the current non-RS GT3. 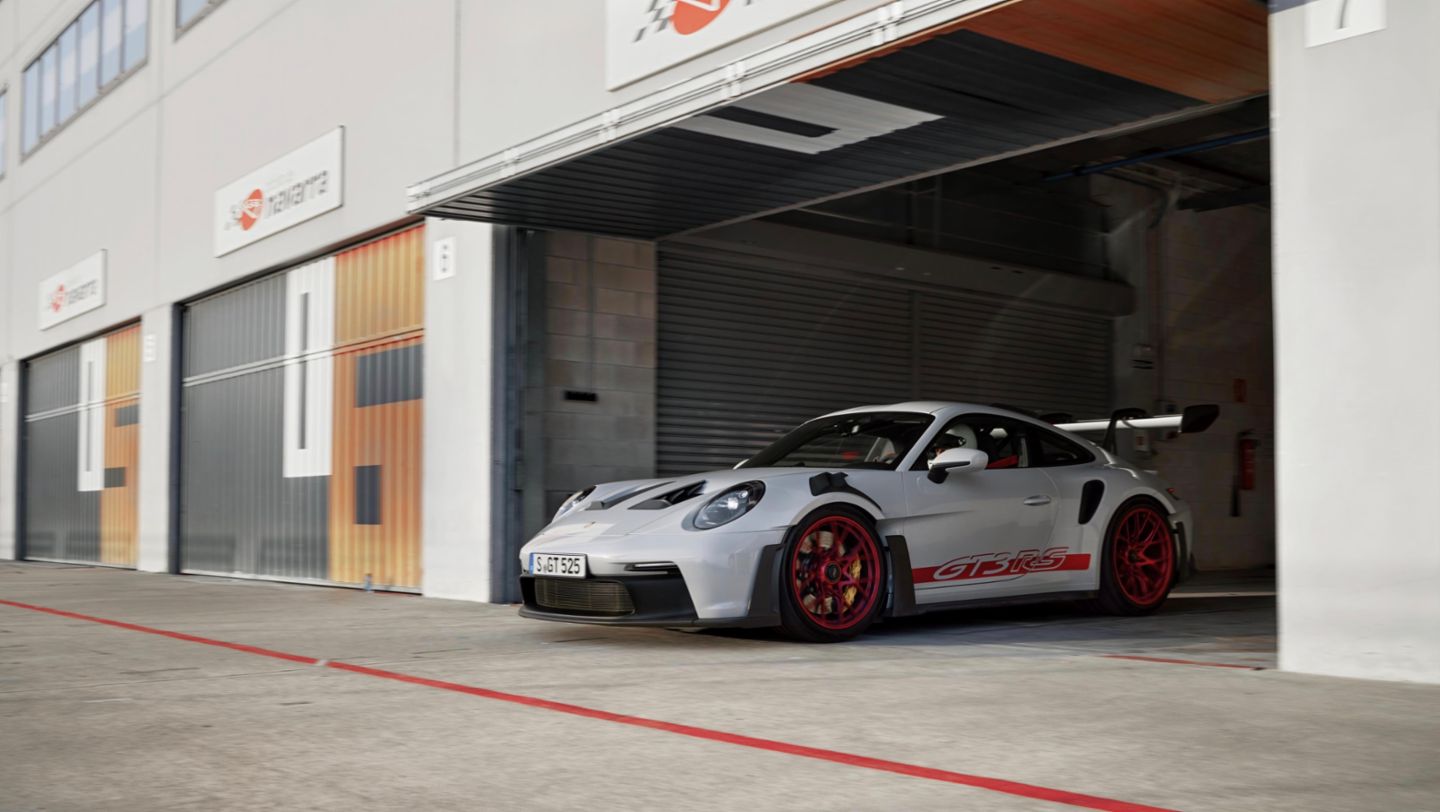 An interesting update to the GT3 RS concept is the ability to adjust the suspension of the car without getting the car up on jacks and adjusting things with tools. Porsche now gives drivers the ability to adjust suspension in track mode with a rotary dial on the steering wheel. You’ve got on-the-fly adjustment of the rebound and compression damping at the front and rear, allowing each axle to be adjusted separately, and in several stages. The rear differential can now also be adjusted on the fly with a rotary knob. This is the next-level track stuff that probably can only be truly used to its fullest by a racing driver, but it’s a cool party trick to show your friends. Speaking of party tricks, let’s talk about that engine. The 4-liter naturally aspirated flat six engine is Porsche’s jewel in the crown. This engine has new cylinder heads, a new intake system, new camshaft with a higher profile. All of that adds up to an increase of five horsepower to 525! Mated to a modified 7-speed PDK gearbox, the new GT3 RS can reach a claimed top speed of 183 miles per hour, and will sprint from 0-60 in just 3.2 seconds. Many components are made from carbon fiber, including the doors, the front fenders, the roof, and the front trunk lid, as well as the standard carbon bucket seats. With all of this lightweighting work, the new GT3 RS weighs in at just 3196 pounds. The Clubsport package is available at no extra cost to GT3 RS buyers, and includes a steel rollbar, a fire extinguisher, and six-point belts for the driver’s seat. If you want to get even more hardcore with it, you can order the Weissach Package, which includes all of the carbon fiber components delivered in bare carbon for a more aggressive look and slightly lighter weight. The package also includes more carbon, as the front and rear anti roll bars, the rear coupling rods, and the shear panel on the rear axle are crafted from the stuff. You also get a carbon rollbar, which shaves about 13 pounds when compared to the standard steel unit in the Clubsport pack. If you order the Weissach pack, you can option a set of magnesium forged wheels, which shave another 16 pounds of unsprung weight! They aren’t cheap, though!