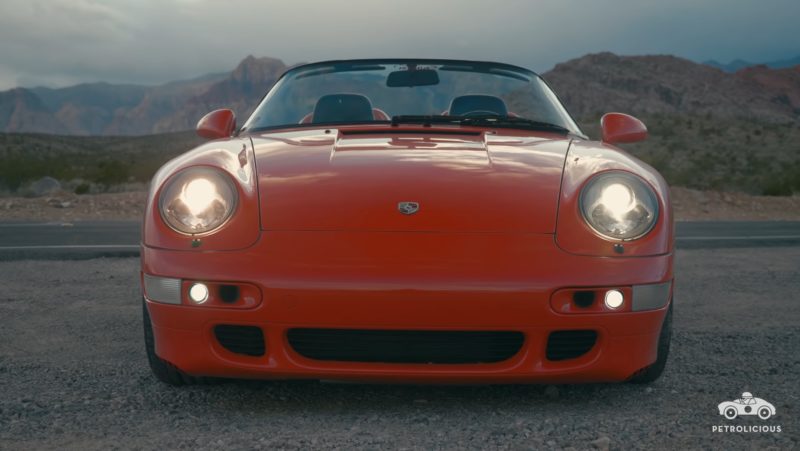 Porsche officially built just one 993-generation 911 Speedster. On the occasion of Butzi Porsche’s 60th birthday in 1995, the company presented him with a one-off tiptronic Speedster on 17″ wheels. Longtime Porsche customer Jerry Seinfeld commissioned the Sonderwunsch program to build him a silver widebody Speedster as well, starting from a cabriolet base car in 1998. Since then, a handful of home-built and specialist assembled cars have been produced, and this red example, as featured by Petrolicious is perhaps among the most often seen of them. It takes a serious passion to re-make your 911 into a different style of 911, but with the right parts, the right mechanic, and enough money, you can accomplish anything you set your mind to.

Even if the factory didn’t build these in large number, it really should have, because this look works incredibly well. The parts installed on this car are largely factory original, with only as few custom pieces as necessary. The windshield has been sourced from a 964 Speedster, and the bodywork has been expertly crafted from other 993 components. The interior is all carbon fiber, and it was hand-crafted by a guy in Germany who did carbon work for the Porsche factory, which is a cool little note. The 993 badge is actually a factory Porsche component, but Porsche never made a 993 badge, so the owners of the car bought a 968 badge. The 6 has been flipped to become the second 9, and the 8 has been cut just right to become a 3. Pretty slick if you ask me.

The car lives in Las Vegas today, and it feels perfectly in line with the car’s ethos. It’s a little flashy, very visible, and has been custom made and personalized to a degree not often seen. From relatively humble beginnings, this 993 won the jackpot and was transformed into a unique vision of Porsche specialness. If you can dream it, you can build it.