According to the fine men and women over at Autocar, Porsche is working on a brand new executive car that will be aimed squarely at BMW’s 5-series in size, and Tesla’s Model S in terms of technology and likely pricing. The new sedan is rumored to be developed with two power-train systems at launch (both driven through the rear wheels), including a true plug-in electric version, and a hydrogen fuel cell electric version. Both are expected to launch in late 2017 or early 2018. This information was gleaned through a series of patent applications filed in various markets. This is a radical departure from the Porsches we all know and love, but as they’ve shown before, they are more than capable of expanding into new markets while retaining that Porsche-ness that makes their vehicles great. This new electric mid-size sedan shouldn’t be looked at any differently. If the Tesla Model S can be seen as a performance sedan, then surely Porsche can make something at as good, and more likley a little better.

According to the patent documents, the Porsche EV will be on a mostly new structure based on the incoming MSB platform. The MSB will underpin the second generation Panamera, a future Bentley model, and potentially a ‘Panamera Junior’ (AKA Pajun). This EV architecture is said to visually share with the Pajun, though will likely receive different front and rear fascia treatments to differentiate the two models. Both designs are claimed to be inspired by the 2012 Panamera Sport Turismo concept. Porsche has worked with the rest of the VAG group to make the MSB platform as modular as possible. Because of that modularity, they will be able to retain the front and rear crash structures of the platform and heavily modify the center section to house the batteries and the electric motor rear drive unit. This drive unit is expected to be structurally mounted, making the power-train an integral part of the rear of the car, helping to increase stiffness.

The battery version is expected to sell a lot more units than the limited production hydrogen fuel stack version. Both should easily aim for something above what the Tesla produces, so it’s safe to say 420 horsepower is their minimum goal, and a range of 270 miles would be about as low as can be expected. 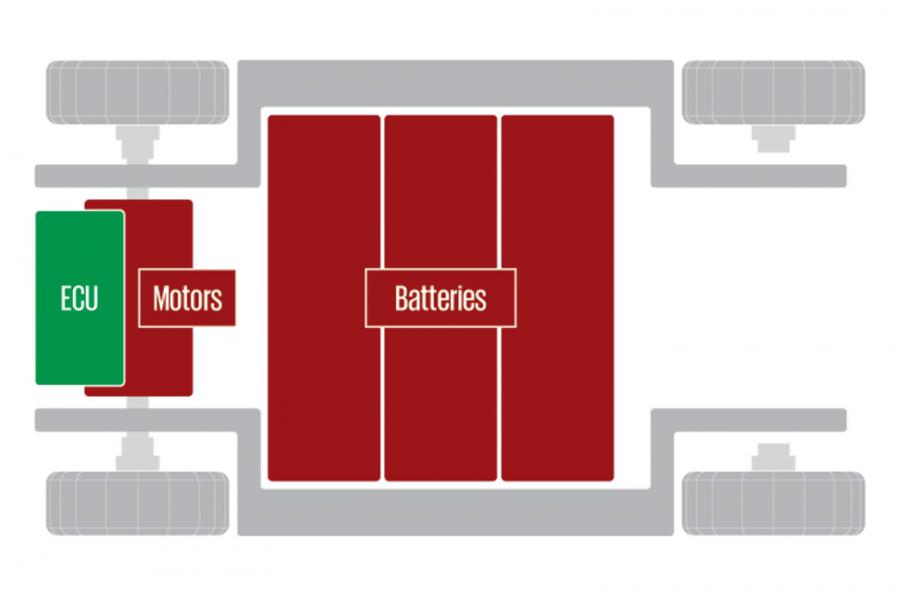 The rear-mounted electric power-train should be similar to the system used in Audi’s R8 e-tron, with one motor on each of the rear wheels. Porsche, however, has made their design a bit more advanced. In the patent paperwork, the system is described as being a “hollow portal axle… that accommodates two electric motors” with a step-down gear mechanism for each wheel. That’s all a little too science-y for me, but hopefully it’ll be good. The system should allow for an advanced independent rear suspension system, and with each rear motor independently operated, torque vectoring should be relatively easy to implement. Allegedly, Porsche is also working on an induction charging system. This system should allow an electric vehicle to park on top of a pad in the owner’s home, and be charged without need for cables or bulky wall-mounted sockets.

Porsche’s current lineup is already one of the most forward thinking in the world of green-technology. They offer four fully-fledged plug-in electric hybrids, including one of the most advanced hypercars in the world, and are among the only companies to have raced a hybrid GT racing car. Their work with the 919 Hybrid in the World Endurance Championship, and partnerships with A123 have advanced Porsche’s knowledge of electric propulsion systems, energy recovery, and lightweight lithium ion batteries. Is the future of the sports sedan electric powered? Is the future of the sports car electric powered?