Most sports prototypes last only a few years before they become obsolete, but the 962 enjoyed a successful run for over a decade. With a combination of unprecedented reliability and drivability, the 962 became dominant in the mid-1980s. Rather than rest on their laurels and grow conceited with their winning streak, Porsche remained honest enough to develop the 962 as technology advanced. To keep up with rapid progression of its rivals and their technology, the 962 received a slew of updates throughout its long and storied career.

It’s not often that a 962 comes up for sale, and if you were looking for one, this might be your chance.

This particular car utilized a mid-career update known as the Chapman chassis. The earlier cars utilized a monocoque tub that was made from riveted and bonded aluminum, but not this 962-C04. Jim Chapman, a former Lola engineer, designed this updated chassis which incorporates honeycomb aluminum panels and billet-aluminum bulkheads to make this car stiffer and better at deploying the power from the IMSA-spec turbo. 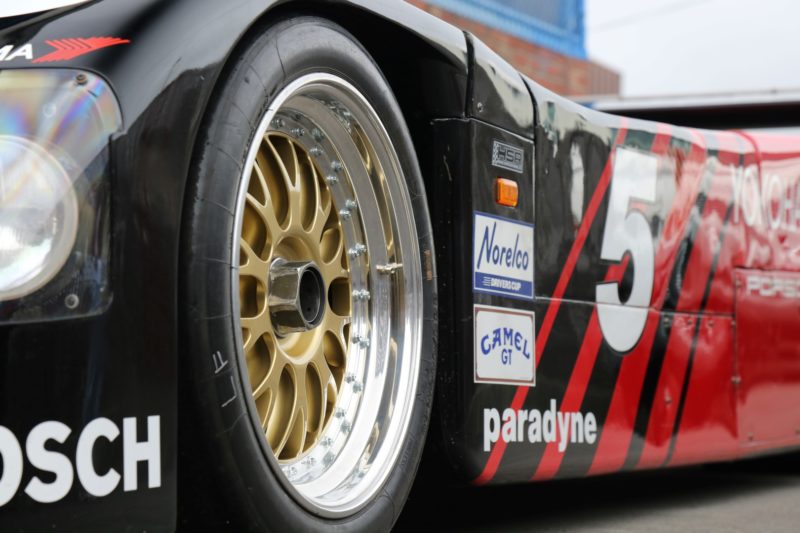 Over that stiffer chassis, the carbon-kevlar panels are covered in that iconic red and black Yokohama livery. Gold 18″ BBS wheels dot each corner, and a massive NACA duct behind the cockpit feeds the massive KKK K36 turbocharger. With this shape and color combination, it’s one of the best looking cars to ever grace the races of IMSA GTP.

Unfortunately, 962-C04 only contested three races throughout the 1987 season. Hurley Haywood, James Weaver, and Vern Schuppan successfully battled with this car at Road America, Columbus, and Del Mar; its highest finish being fifth at Road America. After retiring from professional racing, it’s been driven at historic events such as Rennsport, the Classic 24 Hour at Daytona, and the Rolex Monterey Motorsports Reunion. A short racing career and a pampered life make it a great investment. Bob Akin, the original owner, held on to the car until 1991, when it was sold to a Michigan doctor. After that, a restoration was performed under subsequent ownership by Sean Creech Motorsports, who were again commissioned in 2014 to perform a mechanical overhaul following the current owner’s purchase in 2012. The turbocharged 3.2L flat-six was rebuilt in 2015 by Klaus Fischer of Amalfi Racing. It’s also been fitted with new gearing to suit Sebring, Laguna Seca, and Daytona. Long gears and nearly 600 horsepower should make it new owner a very happy person. Now, the car is currently being auctioned by Fantasy Junction at a current bid of $670,000. For more pictures and information on one of the most gorgeous racing cars in existence, check out the full listing on Bring a Trailer—you won’t be wasting your time.