1. Who was the most intimidating person that you worked with at the shootout?

For me the most intimidating person to work with was my engineer Olaf Manthey because I knew he was a very accomplished engineer, and just being able to work with him was an honor.

2. What was the atmosphere like? Were the drivers competitive or did they share/give advice to each other?

The vibe was very tense especially among the other drivers. We all got along just fine but didn’t share any information or give out any advice. 3. How did you feel going into Lausitzring – a track where you have never raced before? Had any of the other competitors raced there before?

4. How did this shootout differ from other shootouts that you have participated in?

The Porsche Module 2 Shootout was very different from any other shootout I’ve done mostly because the amount of resources that Porsche used to make sure that each driver had no advantage or disadvantage.

5. What kind of Porsches did you drive? Were they the same model that you race in the states? What tires were on them?

I drove the Porsche 991.2 GT3 Cup Car. The same car that I’ve been racing this year but on the Michelin tires which allows the car to behave differently than the Yokohama tires I run with in the IMSA Porsche GT3 Cup Challenge USA. 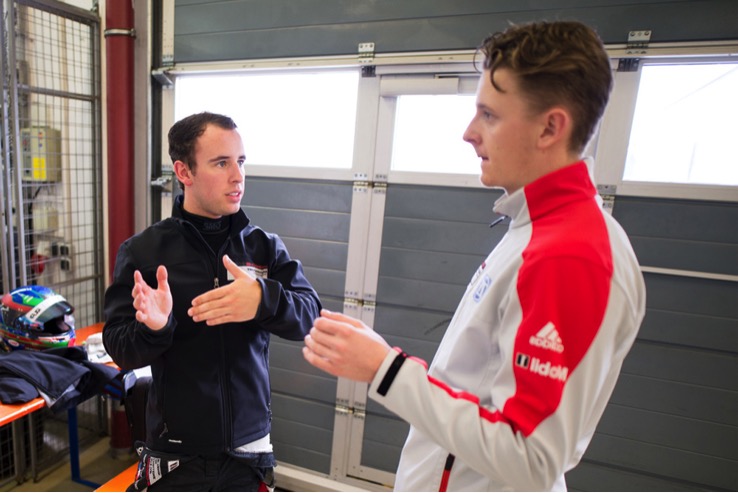 6. What part of the shootout did you find most difficult?

The most difficult aspect of the shootout was the first couple sessions and having to learn a new track on new rain tires and in wet conditions. With limited track time, this made it very challenging.

7. Did you learn any German when you were there? If so which words?

I did learn several basic German words such as Danke (thanks), Auf Wiedersehen (goodbye), and Wo bin ich (where am I?).

8. What was your favorite German food that you ate?

My favorite German food, hands down, had to be the Wiener Schnitzel because I’ve actually never had it before. 9. Is there anything that you took away from your weekend there that you can apply to your last race at Road Atlanta?

One of the largest components that a driver needs in order to be successful is performing under pressure. It’s safe to say that during the shootout I was exposed to a lot of pressure and learning how to adapt as well as excel in these conditions is a trait I can apply anywhere in my racing career including our last two races at Road Atlanta.

10. How will your life change if you win the shootout?

This would be a life changing opportunity because looking at the level of accomplishments that previous winners have made in their careers after becoming a Porsche factory driver shows the success Porsche is always associated with.