With Porsche competing in upcoming races in both the ALMS and Grand-Am this weekend, there’s quite a bit going on. Borgmeister and Long are looking for their fourth 2009 GT2 win and a chance to extend their point lead. While over in the Grand-Am world Dirk Werner and Leh Keen look for their fifth win in the GT class in their Porsche GT3 Cup car, fielded by Farnbacher Loles, as Porsche still fights for points and another class win in the Daytona Prototype series. We’ll be covering both races this weekend here on the blog and on Twitter, so stay tuned for more info.

The Porsche juniors are putting in a brilliant performance in the FIA GT Championship. Martin Ragginger planted the Porsche 911 GT3 RSR of the Brixia team on pole position at the third round in Oschersleben (21 June). After claiming two pole positions and a second in qualifying so far, the Austrian is the best qualifier of the season. At round three in Oschersleben, his colleague Marco Holzer secured third in qualifying and brought his Prospeed Competition Porsche home in second with Sean Edwards after a difficult rain race. Ragginger and his amateur team mate Luigi Lucchini came fifth. Works driver Emmanuel Collard and Richard Westbrook – winners of the first two races – had to retire after a collision but travel to the season highlight, the Spa 24 hour race on 25/26 July, as points’ leaders. Four races, four Porsche victories: Patrick Pilet and Raymond Narac won the fifth round of the International GT Open in Spa (27 June) with the IMSA Performance Matmut 911 GT3 RSR, with Richard Lietz and Gianluca Roda dominating race six in their Autorlando Porsche. One week later, Pilet and Narac proved unbeatable at both races in Donington (4/5 July). Lietz and Roda retain their points’ lead. With a fourth and a second place at the fifth and sixth rounds of the Italian GT Championship in Mugello (20/21 June), Sascha Maassen and Francisco Cruz-Martins (Autorlando Sport) defended their lead position in the top GT2 category with their Porsche 911 GT3 RSR. Gianluca De Lorenzi and Stefano Borghi (GDL Racing, Porsche 911 GT3 Cup S) retain their GT3 class lead after claiming second place. Cedric Sbirazzuoli and Alberto Brambati (911 GT3 Cup) take up the next round in Misano (18/19 July) as front-runners in the GT Cup class. 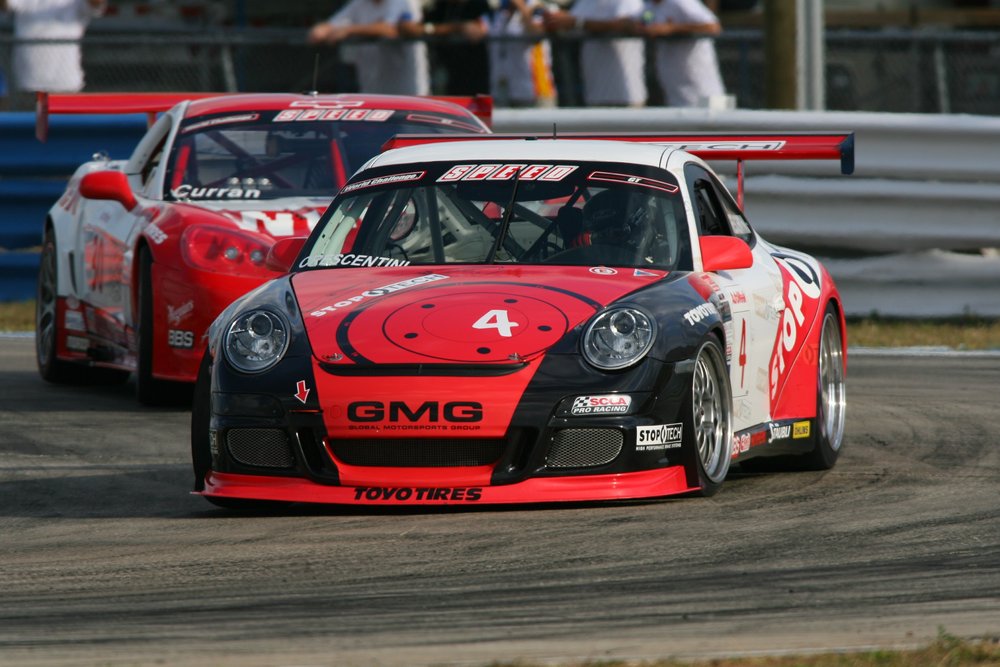 A slightly unusual week for the Global Motorsports Group squad (GMG) in the Speed World Challenge GT: Prior to the race in Watkins Glen the team owner and driver James Sofronas became a father for the first time – and missed the first practice. Still, the new dad put in an inspired drive in his 911 GT3 to bring home third after a tough duel with his team colleague Dino Crescentini. Crescentini won – one day after his 49th birthday – giving GMG plenty of reasons to celebrate in Watkins Glen. Spencer Pumpelly and Duncan Ende showed their nerves of steel at the seventh round of the Grand-Am Koni Sportscar Challenge in Mid-Ohio: Start driver Ende was hit from behind on the first lap, cutting a tyre and forcing an early green flag pit stop. Rejoining the race in 16th, the TRG duo ploughed through the field to take third. With wins three and four in Mid-Ohio (20 June) and Daytona (4 July), the Farnbacher-Loles pilots Leh Keen and Dirk Werner further extended their lead in the GT class of the Grand-Am Series. Timo Bernhard and Romain Dumas are still within striking distance of the title after fourth and eleventh place in the Penske Racing Porsche Riley Daytona Prototypes. +++ Porsche 911 racers on the first four positions, spearheaded by Marcel Tiemann and Arno Klasen in the Manthey 911 GT3 RSR, were the results of race four of the BF Goodrich Long Distance Championship on 13 June. Two weeks later, Chris Mamerow and Dirk Werner were the best Porsche team, claiming second at the wheel of a Mamerow Racing Porsche 911 GT3 Cup S.

Close racing in the Porsche Mobil1 Supercup. After round six in Silverstone (21 June), Richard Westbrook, Patrick Huisman and René Rast are separated by just two points on positions two to four. The trio are pursuing Jeroen Bleekemolen, who holds a 42-point advantage. With five rounds to go, there are still 100 points up for grabs for the winners.