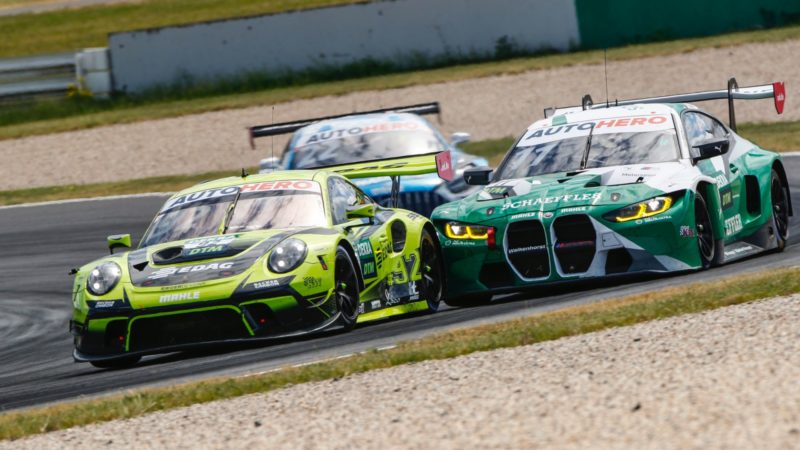 Prior to 2022 Porsche had never even considered entering DTM as a constructor. The European-based series has traditionally been a fighting ring for big German brawlers from the likes of BMW and Mercedes, and while Porsche has a big powerful sedan in its Panamera, that’s hardly the kind of car that needs motorsport chops. Last year, however, the series shifted priorities to run a GT3-based formula, and Porsche already had a car ready-made for that style of racing and slotted in two customer teams right away in Team 75 Bernhard and SSR Performance. Each respective team fielded 911 GT3 Rs for the duration of the championship with Bernhard entering a car for Thomas Preining and SSR running Dennis Olsen and Laurens Vanthoor. Up against the likes of Ferrari, BMW, Mercedes, Audi, and Lamborghini, Porsche did pretty well for its first time in the series, earning three victories from eight double-header rounds. Preining found the top step of the podium twice at the Norisring and the Red Bull Ring, while Olsen won round one at Spa. With six retirements and one DNS, Preining could do no better than fifth in the championship. Olsen himself had five retirements and one DNS, netting him tenth in the championship. Vanthoor was the surprise of the bunch as the Porsche ace finished no higher than 4th, and retired or ran outside of the points in nine of the fourteen rounds he competed in. DTM was truly a knock-down-drag-out championship in 2022, which is truly the DTM way. This is a sprint series known for its elbows-out racing, and we fully expect that tradition to continue in the coming years. Porsche, however, is smart to field more than just three cars. When you’re in a gunfight, remember to bring more than three bullets. Good news, then. In an interview with Motorsport-Total.com one Olaf Manthey confirmed that he is interested in having his team Manthey Racing enter the series, as DTM’s popularity and history make it more appealing than other GT3-based series around the world.

“We are still looking into it at the moment. And I think it will take a few more weeks before we can say something more specific about the direction we are taking. You always have to look at where the coverage is, what the audience figures look like and so on. It all has to make sense,” said Manthey.

Manthey did supply four of its engineers to the SSR team to work on Olsen and Vanthoor’s cars, so they won’t exactly be going in blind. Not to mention the fact that Manthey is a subsidiary of Porsche Motorsport, and has thousands of hours of testing and competition aboard the 911 GT3 R, and helped with development of the next-generation GT3 R. Porsche brand newcomer Toksport WRT is also potentially interested in fielding a GT3 R in DTM next season. The team has previously attempted to join the fray unsuccessfully in Mercedes and Aston Martin equipment, but recently ditched its ties with Mercedes in favor of a Porsche outing at the 24 Hours of Spa and the 24 Hours of Nurburgring. The going rumors conclude that the team has raised funds in order to compete in DTM next season, and has ordered a pair of new GT3 R for the effort. We won’t know for sure until testing begins, but you can bet it would be a good idea.

According to Motorsport.com, DTM is pursuing an effort to limit how many cars can be fielded in the series by any given manufacturer to six. While Porsche wasn’t anywhere near that number in 2022, it could be close to needing to find someone to push out of its nest in 2023 if these rumors prove true. A two-car effort from Toksport, Manthey, and Team 75 Bernhard seem most likely, with SSR discussing leaving for a different manufacturer already anyhow. Whatever the case, we sure hope Porsche gets more cars on the grid next season, and competes for titles, as it properly should.