LEGO’s ‘Technic’ branded sets are among the most intricate and detailed pieces that you can buy, and usually among the more expensive sets as well. These aren’t your average LEGO sets that can be assembled by 9 year olds. Most Lego sets are rated for people age 9-99, and this one is so difficult in fact, that LEGO is rating it for people 16 and older. This set, as you can see from the photos, features what appears to be a Porsche 911 race car of some kind. At first I was inclined to say this was an RSR, but now I’m not so sure. The details of the front bumper appear to be more closely related to the 991 GT3 street car. Perhaps this is an as-yet unhomologated 2017 RSR? Does LEGO have an inside track on a car that the public hasn’t seen yet? This set, as yet unnamed, is known only as its model number, 42056. While the London Toy Fair is going on right now, and LEGO has teased a lot of upcoming product at that show, this set does not appear to be on their roster, but perhaps was only shown to some LEGO loyalists in a back room somewhere. Regardless, I’ll obviously be in line to buy a few shopping carts full of these sets when they are launched for public sale. It’s a gorgeous set, and should be a lot of fun to assemble. I’ve been playing with LEGO since I was a young child, and I’m not ashamed to admit that I still buy sets that are based on cars. We even assembled the 918 Spyder that LEGO released last year right here for you to see. 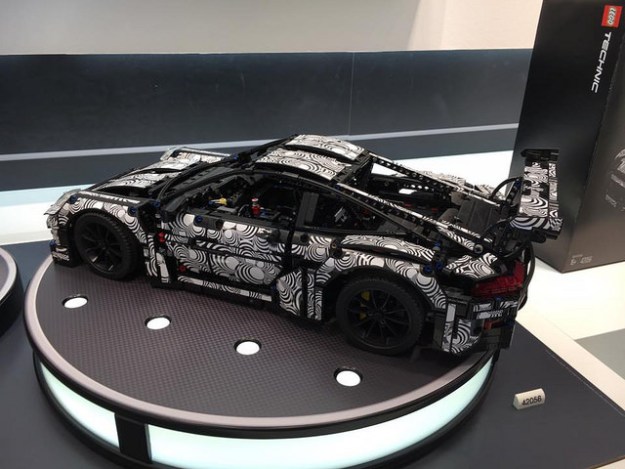 [Photos sourced from JimVanGulik on Flicker.com, hat tip to Brick-Brothers.com.]