Every year Amelia Island’s auction action gets even better. Last year was pretty amazing, but this year we have two new auction houses joining the event with some seriously cool cars, and more Porsche lots than ever before. Porsche’s 914 is the featured marque of the event, so there are a few of those to be had. Add in a 911 or 356 for almost every taste, and you’ve got a whole lot to love about this auction weekend. There are literally millions of dollars worth of Porsche lots being offered, a total of 52 of them in fact. Each of these Porsche is more exciting than the last. I can’t wait to see what kind of new record prices will be captured this year.

As usual, Gooding’s got the goodies. Four of the best and most desirable 911s ever built are my choice picks for this weekend’s festivities. Yes, that’s a real honest-to-goodness 993 GT2 for sale in the US. Add in a beautiful Carrera RS lightweight, a 993 Turbo S, and an early 911 RSR, and you’ve got the recipe for an amazing sale. And that’s not to make mention of any of the other amazing Porsche lots available. Check this one out, for sure. 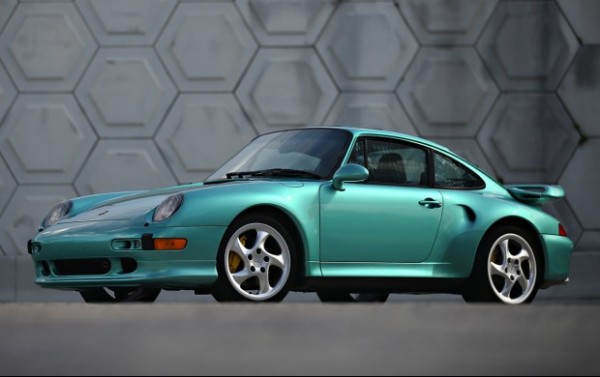 The market on these Porsche has had an absolutely ballistic trajectory in the last two years or so. There isn’t much in the way of history on this car, being that it’s still only 18 years old and has traveled just a little more than 15,000 miles. You can pretty well expect this car to drive like brand new, and it certainly looks like it’s brand new. The interior has Classic Grey leather everywhere, and the exterior has an original coat of Ocean Jade Metallic. What a lovely, if a bit eclectic, color this is for a car like this. This Porsche is quite rare with only a few hundred ever produced, and less than a handful made in this color. Given that I’ve seen a handful of 993 Turbo non-S cars selling at the top end of this expected price range in the last month or so, I’d guess this Porsche will blow the pre-auction estimate out of the water. I fully expect to see this car crest the half a million mark. Where else can you get a car that has competed in the 24 Hours of Daytona an astonishing 7 times? How about a 2-time Sebring 12 Hours competitor? This Porsche has all of that provenance and then some. Driver Hector Rebaque was the original buyer, and with it he won the very first race he campaigned in the 1000KM of Mexico. After that, he continued to run the car through 1979. The Porsche was still amazingly competitive after that, though, because it finished 5th overall, and 2nd in the GTO class, at the 1983 running of the Daytona 24. The car even won the 3 Hours of Puerto Rico three times under the control of second owner, Diego Febles.

Following its racing life, the Porsche resided in a handful of private collections where it was largely stationary, showing up at the Monterey Historics only on one occasion. The current owner, an Australian enthusiast, commissioned a full restoration to original 1975 specs and livery in preparation for a number of vintage racing events. According to reports by both Jurgen Barth and John Starkey, both considered supreme minds in the arena of RS and RSR Porsches, this is among the finest Porsche of its kind. Just last year, this car was run at the Daytona Classic 24 event, where it finished fourth overall in the B group outing for all cars from 1973-1982. Not only is it gorgeous and original, it appears to be quite fast as well. This would be another excellent candidate for an aspiring owner to bring to the Rennsport Reunion this fall. Nobody really knows for sure, including Porsche, but it is said that as few as 57 Strasse versions of the 993 GT2 left the factory, of which this is one. Built as a homologation special, the GT2 is widely considered to be one of the best, and perhaps most insane, Porsche road cars to drive. This was the absolute last aircooled turbo model developed by Porsche, and its track record speaks for itself. As rarities in the Porsche market go, these are like hens teeth. The Polar Silver over black color scheme of this car is beautiful, and shows well with only just over 22,000 miles on the odometer. This would be an excellent car to drive to the Rennsport Reunion this fall, and would surely get a parking spot of high regard. This Carrera RS has a lot going for it. For one thing, it’s an early series I car. For another, it was optioned with the desirable M471 ‘lightweight’ package. Add in the near-perfect restoration, and the fact that it’s an attractive Light Yellow color, and you’ve got the set up for an excellent collector car. The only downside, and it’s a big one, is that the car’s original engine was blown up in a race back in 1976. At that time, Porsche had produced a limited batch of replacement engines, and one of them was commissioned to this car. That replacement engine case, while still with the car, has been replaced in the engine compartment by an NOS unstamped unit. The spare case is said to remain in serviceable condition. Is a non-numbers matching car worth 7-figures? If it were anything but an M471 package car, I’d say no. We’ll see what the buyers think.

Other Gooding and Company Porsche Lots For Sale