Recently, the collector Porsche market has been going absolutely wild, and nowhere is that more evident than the valuation of particularly clean examples of the 993-generation 911 Turbo and Turbo S. These are cars that, just a few short years ago, could be purchased for a fraction of their current values, so why the sudden shift? Is this inflationary price tag here to stay, or will the 993 bubble burst? Who better to ask than the expert? We wanted to know what there was to know about the 993 Turbo market, so we gave a call to FLATSIXES.com sponsor, Willhoit Enterprises [the place we bought our 993 that our logo is modeled after]. Just a couple of years ago, the best 993 Turbos were eighty-thousand dollar cars, in fact I saw a few sell at around 60 grand in early 2012. Today, you’d be hard pressed to find one in decent condition at double that figure. Willhoit figures that this is just the tip of the iceberg, and that these cars are only going to continue gaining in value. Nice for the people who have them. Not so nice for those of us that want one. If you are in the market, you’d better buy quickly. They say that the best of the best 993 Turbos are going to be quarter million dollar cars come next spring. Seriously?

Why is the 993 Turbo such a hot commodity all of a sudden?

According to Willhoit, it’s the Porsche he’d most like to own for his own collection “without question“. Aside from his claims that they are gaining around twenty-thousand dollars in value per month, he states that the newer Porsche Turbo models may be faster, but lack the personality found in the 993’s aircooled version. In this market of skeptical investing, it is nice to have something tangible for your money. With the market the way it is, it is possible to buy a 993 Turbo, enjoy owning it and driving it, then sell it for a tidy profit in a year or often less.

There is something to that, certainly. I’ve been behind the wheel of a few 993 Turbos, and there is certainly nothing like that experience. It’s the surge of the turbochargers. It’s got that distinctive aircooled sound. It even smells a certain way, that hot smell. You know the one. That’s not to mention the absolute beauty that is the curved flanks of a 993 widebody. Sure, the all wheel drive system is still a bit primitive by today’s standards. Yeah, the interior is pretty familiar if you’ve spent your life around air cooled cars. The windshield shape dates all the way back to 1964. The switchgear is clicky and plasticky. None of that matters once you fire it up and get underway. Wait until its warmed up, then tromp on the throttle a few times and you’ll forgive all its trespasses. You’ve got 408 horsepower under your right foot. You’ve got a pretty darned good Getrag G64 transaxle to row through. You’ve got all wheel drive spinning 18X8 front and 18X10 rear iconic ‘Turbo Twist’ wheels. It’s an almost 20 year old car that sprints to 60 miles per hour in only 3.9 seconds. How could you go wrong? Of course this is an investment quality vehicle. 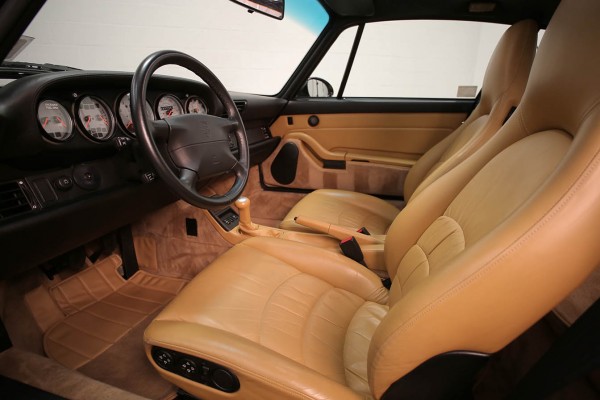 So back to the question at hand; Is this a bubble in the market, and is it going to burst any time soon?

Well, first, lets analyze the last couple of bubbles to burst, most notably the Muscle Car collector bubble of the early 2000s, and the Ferrari collector bubble following Enzo’s death in 1988. Both of these artificial market inflations were defined by a single similarity. Neither of those bubbles were driven by scarcity, only perceived scarcity. The muscle car market rise was initially driven by a certain level of scarcity, as people started looking for rarer and rarer option packages. A perfectly kept rare option car was all of a sudden worth an astronomical sum, and we witnessed million dollar Plymouth Hemi Cuda convertibles, but only in some weird color, with air conditioning, built on a Tuesday, with original tires still fitted and only 20 miles on the odometer. This then artificially inflated the value of the more pedestrian muscle cars. When people wizened up, the bottom fell out in a big way. Similarly, following Enzo Ferrari’s passing, a lot of market speculators when out and bought F-cars, this drove up prices for a little while, but then the economy took a dip, and a lot of collectors (most especially those in Japan) started dumping their cars and driving the prices back down. That bubble burst just a year or two after it rose, and by 1991 certainly, things had normalized again. 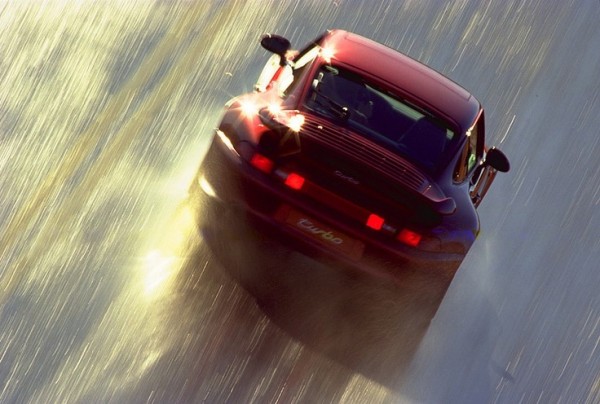 Is The 993 Market Heading For A Similar Crash?

Willhoit says no, and its all down to one simple sentence. Demand is continually outpacing supply. They simply aren’t making the 993 Turbo anymore, and there are new collectors wanting to buy the best 993s money can buy almost every day. People who have traditionally collected higher end cars, folks that are used to spending a million dollars for a car, are taking a serious look at the 993 Turbo as an investment now, and are unfazed by a pricetag only one quarter of that. Cars, especially ones as beautiful as Porsche’s 993, are now being accepted as true objects d’art, and hoarded as such. Any good private Porsche collection has at least one 993 Turbo these days, and the really good ones are becoming ever more difficult to acquire.

So What Options Do You Look For In A 993 Turbo?

Premium colors are always a solid choice. A personal favorite is the beautiful Arena Red, though Midnight Blue might be a close second. For the sake of rarity, finding a car in a paint-to-sample color seems to be the hot choice lately, especially anything in Mexico or Riviera Blue (It seems to be Seinfeld’s favorite Porsche color, after all). Lighter interior colors are generally preferred, but black tends to hide its age a bit better. Most people won’t be picky about the interior, though personally I’d avoid wood or carbon fiber trims if given the option, feeling them simply to be a bit dated. Willhoit says that the best one to look for is the 1997 model, as only 612 Turbos were imported to the US for that year according to PCNA. However, we also got 1297 turbos in 1996, and I certainly wouldn’t kick one of those out of my garage for being too common. One thing is for certain, if the 993 Turbo is speculated to hit a quarter million next spring, what will we see 993 Turbo S models going for? That’s a whole other post, don’t you think? 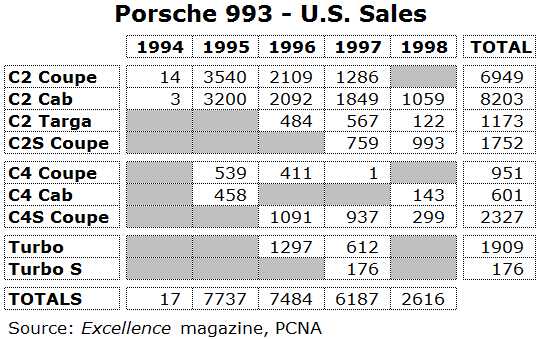 As with every investment, though, there is always risk. Mr. Warren Buffett, the renowned oracle of Omaha, once said “Be fearful when others are greedy, and greedy when others are fearful”. Whether that applies here is for you to decide. So let’s hear it, are you in the market for a 993 Turbo?

Other Porsche Blog Posts You Will Enjoy
The Evolution of Porsche Keys
Here’s A Video Explaining Exactly How To Convert Your Porsche 993′s Headlights To HID
Confirmed: A Porsche 911 Targa Reimagined By Singer Is On The Way!
Woman Buys Porsche. Totals It As She Drives Off Lot.