Few racing outfits find the newest GT2 RS in need of modification, but Manthey found a few areas which could be improved. With tweaks to the suspension and the aerodynamics, their GT2 RS MR logged a lap of 2:31.00 around Spa-Francorchamps, where the Koenigsegg One:1 took 2:32.1 seconds to log its best.

The Swedish hypercar’s attempt might’ve been compromised by lots of traffic that day, but it nonetheless demonstrates the awesome performance of the GT2 RS with a subtle nip, tuck, and tune. In the defense of the Porsche, it too had to contend with some slower cars—a Cayman GT4 (2:14)—in one of the fastest parts of the circuit, which certainly cost it a few tenths, if not more.

The power figures are well known, but the racing firm’s belief is that making better use of the power and improving the chassis is where the key to better lap times lies. Manthey’s been a bit cagey about releasing the specifics on their modifications to this Porsche, but what is known is that their own suspension kit (likely using KW products), their brake pads and lines, and their own aerodynamic kit have been added. For added driver safety, they installed a Recaro P1300GT halo-style seat. At all four corners, the GT2 RS MR wears the Michelin Pilot Sport Cup 2 N2 tires.

The changes might not sound like much, but if the Manthey GT3 RS MR is anything to go by, they will likely cost as much as a new 3 Series, if not more. The reason for this is these components are tested and refined to show real returns in terms of lap time, as Manthey’s Michael Grassl supports: “Currently we are working on the GT2 RS and the test in Spa last week was dedicated to suspension and aerodynamic tests. It was a test to have a first roll out with those options in order to see the effect on handling and receive driver’s feedback.”

As this car is still in a fledgling state, we can expect that further refinement will come. “Please understand that we don’t want to give further details about all the options being tested at this moment as we are still in R&D process,” adds Grassl. In time, we can expect more performance, details on the spec, and possibly another blistering lap from sport auto. 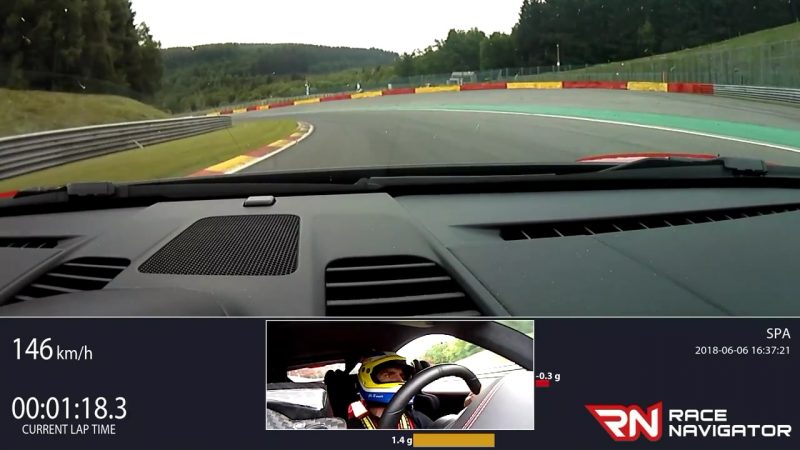 Like its normally-aspirated sibling, the GT2 RS MR shows incredible composure over the bumps and curbs, so that putting down 700 horsepower is always done without much wheelspin, save for in the slowest corners like Les Combes. Its high-speed stability is even more impressive, especially since it moves around during some of the direction changes—note the sideways moment heading into Pouhon at some 116 miles an hour (1:28). Yet, that mild yaw seems to be an asset, not a hindrance. It’s controllable and based on the way Christoph Breuer can remain comfortably on the throttle during that little wiggle, it looks to give him the chance to straighten the Porsche a hair earlier and exploit that incredible traction. Quite simply, it’s a staggering 911, and though the price with modifications might be well outside the range of most, it still looks like a bargain when contrasted with the Koenigsegg.