15. Brumos Racing Came Back, And Then Went Away Again Since Brumos Racing discontinued their GT program in 2013, we’ve been deprived of the iconic Red/White/Blue livery that we Porsche fans have grown to know and love. That is, until this year at the Daytona 24 hour and the Sebring 12 hour, when Brumos joined forces with Dempsey Racing and Wright Motorsports. The livery was back on a gorgeous Porsche, and it fought well in both races. Unfortunately it was only a two-race deal, but it was better than nothing. Even worse than that, though, is the recent news that the Brumos dealership has been sold to an investment group, and the dream might be over. We haven’t heard the last word on this subject yet, so we’ll remain optimistic, but it doesn’t look great. Thanks for the memories, I guess. As exciting as all of the new road car launches have been, Porsche has also been working on new product for their track-going counterparts. There’s the new GT3 R and Cayman GT4 Clubsport race cars just waiting to attack the 2016 motorsport season with the kind of verve only Porsche could dream up. Back in June, we got to visit the workshops at Singer, but we were sworn to secrecy about what we saw while visiting. That’s because they were putting the finishing touches on their first Targa model and pictures of it hadn’t been made public yet (even though we broke the news back in 2014) . Just a week later, the wraps were taken off of the car at the Goodwood Festival of Speed. And what a glorious car it was to behold. The only way to make a 4.0 liter Ed Pink-built engine sound better is to take the roof off, so the Targa only makes sense!

12. Everything With A Porsche Badge Is Selling For Crazy Money On The Collector Market

It isn’t just famous cars that are worth lots of money these days. Special edition Porsches, “rare” Porsches, and well, really all of them are inflating rapidly in value. For the most part, if it isn’t a 996/986, a 924, or a 928, it’s going up in value, and fast. 993s have gone way up, early longhood 911s and 912s are regularly trading hands in the 6-figures these days, heck, even Carrera GTs are supposedly million dollar cars now. Not to mention the fact that brand new GT3 RS models are selling for well over invoice, and now that 918 Spyders have sold out, second hand models with a handful of miles on them are for sale with asking prices more than double the old MSRP. Is this insanity ever going to end? Another celebrity Porsche just sold a few weeks ago at RM/Sotheby’s New York sale, dubbed “Driven By Disruption”. The buyer of this Porsche was much less likely to be a fan of cars and more a fan of music and its history. Janis Joplin embodies the free spirit of the ’60s and ’70s that everyone loves to romanticize these days, and this Porsche is representative of that California culture as well. While the 356, on its own merits, is perhaps worth a hundred thousand dollars, the fact that it was Joplin’s Porsche ended up inflating that value several times over. The psychedelic paint-job of Janis Joplin’s 356 SC Cabriolet attracted the attention of many bidders with lots of spare cash (even though it wasn’t the original paint work). The car, after a bidding frenzy that swept the auction room, ended up selling for $1.76 million dollars after buyer’s premiums. That is far and away the most anyone has ever paid for any 356, and will likely remain so for quite a while.

Would you pay two million dollars for the chance to own Steve McQueen’s 1976 930? Someone thought that was an appropriate number to pay, and that’s where the bidding went. The Monterey Mecum crowd whipped themselves into a frenzy, and a bunch of people got really excited about a McQueen Porsche. It’s a pretty cool car, but I’m not sure it was worth two really, really big bills. When a car has achieved the podium at Le Mans twice, and one of those was an overall victory, it’s automatically worth a lot of money. Add in the fact that it’s an iconic design from Porsche in an iconic livery, and it was driven by legends like Haywood, Holbert, Schuppan, and Mass, and you’ve got a recipe for massive money. This Porsche went on to sell for just a smidge over $10 million dollars, and it had the provenance to back it up. I was in the room when it sold, and I got to touch the car, which was an amazing experience. The new owner should be very happy with their purchase.

If you weren’t at Rennsport Reunion V this year, you just won’t be able to understand how amazing that event was. Porsche’s relatively small team of PR representatives pulled off an amazing feat, and they don’t get enough credit for it. Laguna Seca was jam packed full of P-cars spanning the full gamut of Porsche’s existence. I saw Pre-A 356s, a half-dozen Le Mans winning prototype racers, all the way up to Porsche’s newest 991.2 Carrera and Carrera S with the new 3.0 liter engine (in fact, we were one of the first to ever get a ride in one). It was like going to a museum for three days, except I still didn’t get a chance to see everything, and all of the exhibits were moving! Besides, there were just so many 917s there! 7. Porsche Has Their Best Sales Year Ever

We won’t know the final total until after the first of the year, but Porsche has already broken their previous best sales year by quite a wide margin. Porsche will have delivered well clear of 200,000 cars in 2015, and that’s quite an accomplishment. Good product, new product, and exciting product, combined with a growing dealership network and steady growth in new markets means Porsche has a lot of traffic in their dealerships, and waiting lists for product that extend over 12 months for certain vehicles. More growth is expected next year.

6. All Of The Awards

I’m sure there are others, but that’s already a pretty impressive list. Way to go, Porsche!

5. All Of The New Car Launches From an enthusiast standpoint, this may have been Porsche’s best year ever. In 2015 we’ve seen the newly facelifted 911, as well as the 991 GT3 RS, the Cayman GT4, and the Boxster Spyder. Not to mention a new Cayenne Turbo S and Macan GTS. And don’t forget about the coolest concept car ever; Mission E.

That’s a mighty impressive list of feats for a single season. Porsche ran six full-season lineups, two LMP1 cars in WEC (with a third at Le Mans), two GTE Pro cars in WEC, and two GTLM cars in USCC. An absolutely epic level of competition tried to keep Porsche down, but they succeeded on all fronts. 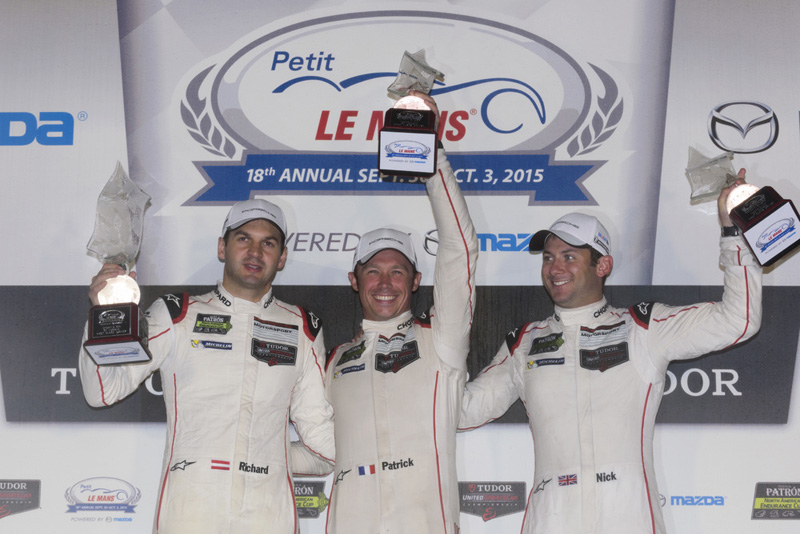 While the 919 Hybrid was dominating the overall victories across the world in the World Endurance Championship, here in the states, the 911 RSR was holding its own in the United Sports Car Championship’s GTLM category. The season ending race at Road Atlanta, however, was their biggest success of the year. Because of the horrendous rain that the track experienced during the fall race, the 911 RSR succeeded in taking down the overall victory thanks (in part) to superb wet weather tires from Michelin. A GT car taking the overall victory over the usually faster prototypes is something that has not happened in many years, and it was exciting to watch unfold. Of course, a well executed drive from Pilet, Lietz, and Tandy is a huge part of Porsche’s success in this endurance feat.

Porsche grabbed their 17th overall victory at the 24 Hours of Le Mans this summer. That’s a momentous occasion for any manufacturer, but to take on the best prototype racers from Audi, Toyota, and Nissan and come out victorious is a feat that Zuffenhausen can really be proud of. The 919 Hybrid program has been wildly successful for Porsche, and proves that they are among the worlds leaders in developing technology where the outcome is speed. All hail the new Weltmeisteren.

1. The Naturally Aspirated Engine Is On The Way Out

While it may have been expected, it was still a bit of a shock to learn that the 911 is losing its naturally aspirated engine and that soon all 911s (and other models, too) will be powered using forced induction. With CAFE regulations looming, and the need for improved fuel economy, Porsche was left with little choice but to add turbos. Fortunately, the reviews are in, we’ve driven the new 911, and it’s everything you could hope for and then some.